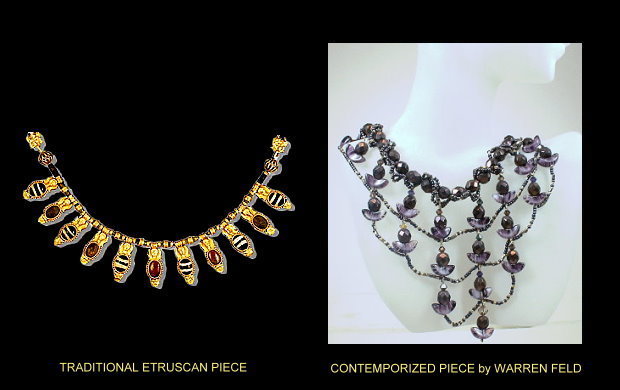 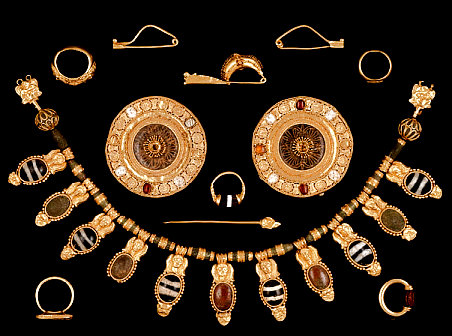 "This tomb group represents one of the richest and most impressive sets of Etruscan jewelry ever found. It comprises a splendid gold and glass pendant necklace, a pair of gold and rock-crystal disk earrings, a gold fibula (dress fastener) decorated with a sphinx, a pair of plain gold fibulae, a gold dress pin, and five finger rings. Two of the rings have engraved scarabs that revolve on a swivel bezel, one is decorated with embossed satyr heads, and the other two have decorated gold bezels. The disk earring is originally a Lydian type of jewelry that became fashionable in Etruria in the latter part of the sixth century B.C., when the Etruscans were strongly influenced by eastern Greek artists and their works." -- from Metropolitan Museum of Art, NYC, Exhibit Catalog.

This is a very standard design for a bead-drop necklace, yet great attention was paid to detailing each pendant drop, spacing out the drops along the line of the necklace circle, and maintaining a traditional color pattern. In spite of the detailing and relief-work (repouse), the traditional Etruscan piece still feels somewhat flat and one-dimensional.

I have taken the basic form, pattern, and attempt at dimensionality, and given it some more play. 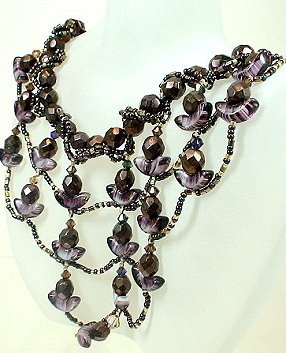 In the Contemporary Etruscan Vine Necklace, I combine some bead stringing with some bead-woven netting techniques. The beads used include Czech glass angel wings and fire polish beads, austrian crystal beads, gold filled beads, and Japanese Miyuki glass seed beads and delica beads, including some 24KT delica beads. The piece is strung on FireLine. The necklace is meant to be worn as a choker, and has an adjustable hook and eye clasp, allowing the length to vary between 15 1/2" and 17 1/2".